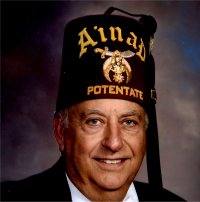 Doc was the youngest of nine children born to John and Lena Clubb. Doc moved to St. Louis as a child and has lived in Belleville since he was a teenager. He was a retired local delivery driver for Roadway Express having served 30 years with the company.

He was a member of East Lodge 504 A.F. & A.M., Scottish Rite Bodies, received MSA June 13, 1997, and Honorary 33rd Degree August 30, 2005 in Grand Rapid, MI, Ainad Shrine Past Potentate 2006 and again in 2016, Southern Illinois Court 86 ROJ and Legion of Honor Demolay. Doc also served on the Board of Directors of Children’s Dyslexia Center of Southern Illinois for many years and served as Chairman of the Board form 2011 to 2013. He exemplified Masonic values.

Memorials: Memorials may be made to the Ainad Shrine Transportation Fund or the Children’s Dyslexia Center of Southern Illinois.

Funeral: Private family interment at Lake View Memorial Gardens, Fairview Heights, IL. A Celebration of Life for Doc will be held for family and friends at a later date when it is safe for all to congregate.