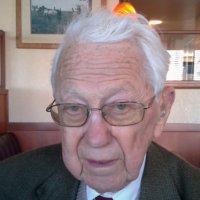 William “Wayne” McKinley, 99, lifelong resident of Belleville, passed away peacefully Wednesday evening the 24th of February at the Cedarhurst Nursing Home in Waterloo.

Wayne was preceded in death by his wife of 47 years, Gloria Collis who passed away in Belleville in 2009, two brothers, Dean McKinley of Belleville, William “Bill” McKinley of Florida and a sister, Catherine Hinerman.

Born May 20, 1921 in Freeburg he was the fourth of five children of the late, Lemuel Ransom “L. R.” McKinley and Catherine Stevenson McKinley. Shortly after Wayne was born L. R. established one of the first Chevrolet automobile dealerships in Southern Illinois, operated as L.R. McKinley and Sons Incorporated on West Main Street in Belleville from 1921 until 1975. In 1949, Wayne established the satellite dealership known as O’Fallon Motor Co. Inc. in O’Fallon, Illinois selling new and used Chevrolet cars for nearly 55 years from the same location on South Lincoln Avenue.

He was the last surviving, original founder of the Bank of O’Fallon, in O’Fallon Illinois which he helped to establish in 1959 and was an honorable member of Kiwanis International for 65 years. Wayne was a businessman, a philanthropist, and well-respected member of the communities of Belleville and O’Fallon and was known for his trademark smile and ever-present suit and tie, even underneath his coveralls when working on his antique car collection. He was widely known throughout the United States and worldwide for his love and adventures with antique automobiles. He was a collector’s collector who loved to show his collection and share his vast knowledge about early automotive history. He was a friend to all who knew him; kind and generous of his time, his wit, his wisdom, and his possessions and never spoke ill of anyone.