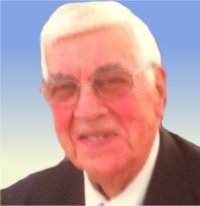 Newt was a friend to all and never met a stranger. He and his dog, Dory, were fixtures in Smithton, Ill., where he lived for the past 15+ years. He was full of life and energy, and enjoyed walking the town and socializing. Newt was a proud Korean War Veteran serving in the United States Air Force from 1948-1952. He was exceptionally thrilled to participate in the Veterans Honor Flight in October 2019. Newt married Mary L. Thebus in 1952 and was blessed with five daughters. In 1975, he married his second wife, Anna (née Hackney) Collins and gained four stepchildren. Newt was preceded in death by both wives.

Newt was employed as manager for the Bond Tire Company in East St. Louis for decades. When Bond Tire closed, he joined Catholic Urban Programs (CUP) in East St. Louis, managing the St. Vincent de Paul store and Cosgrove Kitchen until his retirement. He was active in the Silver Sneakers program at the downtown Belleville YMCA. Newt’s dedication to staying active had people constantly asking him if he had discovered the fountain of youth. Newt arrived early at the “Y” each morning and was known as its unofficial greeter; his cadre of “Y” friends became a part of his family.

Newt is survived by his:

Preceding Newt in death were his:

Per Newt’s wishes there will be no funeral service. His ashes will be inurned in the columbarium at Jefferson Barracks National Cemetery, St. Louis. There will be a Farewell Party at a later date.