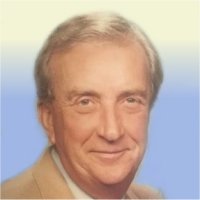 Tom is survived by his:

Tom was blessed with personality plus and known for his humor and zest for life. He served 33 years as a Democratic precinct committeeman in St. Clair County, where he was an inspirational force in getting people to the polls to vote. He was a graduate of East St. Louis High School, Class of 1946 and attended St. Louis University.

Athletic, long and lanky, Tom played baseball on several semi-professional teams throughout the Southern Illinois area. He signed on as a pitcher for the San Angelo Colts professional baseball team from 1949-1950, the Long Horn League, with a record 95 mph fast ball. His athleticism continued throughout his life – he got his last hole-in-one when he was 84 years old. Although Tom had several hole-in-ones, he was most proud of his two double eagles.

As a Korean War Veteran, he served in the Reserves of the 102nd Ozark Infantry Division from 1951 to 1955. He was one of the founding fathers of the West End Khoury League Baseball Association and was awarded the 1966-67 Man of the Year Award for his service. He managed and coached many championship Khoury League teams (hundreds of young baseball players) throughout the 1950 and 1960’s.

His employment history began as a contractor salesman for Mobil Oil Company. In the 1950’s, Tom went to work for the Euclid Company of Ohio where he was awarded the number 1 Salesman in the United States. He was instrumental in solidifying heavy construction equipment sales for Euclid. He was a national award winning salesmen for the Paul J Meyer Success Motivational Institute. Tom was also a ground-breaking partner in marketing the apartment community at the Shrine of our Lady of the Snows. He worked for the Governor for the State of Illinois and retired from the Office of Comptroller in 1992. He was a long time friend of Bill W and known as a legendary inspiration. His favorite saying: Acceptance is the answer to all my problems today…

Mass: Mass of Christian Burial will be held at 11:00am with Father Ken York officiating. Tom will be buried next to his loving wife, Mary Ann, at Mount Carmel Cemetery.