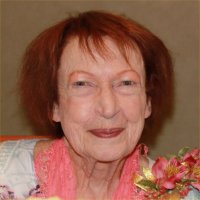 W. Ruth Dingwall Anderson transitioned from this life to eternal life on April 18, 2020 in Belleville, IL. She was the daughter of Kenneth Murdoch Dingwall and Wilma Annice Dingwall (nee Arandale). Her brother Kenneth Dingwall proceeded her in death. Her sister Ellen Friesen (Dean) survives. Her loving husband of 52 years, David, survives as well as their children, Michael and Bryan Anderson. Michael’s wife Kathryn and their three children also survive and were dearly loved. Bryan and wife Heather were so important to Ruth.

Ruth was born on January 18, 1940, in Newton, Kansas. She loved school, and graduated from Newton High School in 1957. Having a scholarship that included tuition and books to Kansas State Teachers College (now Emporia State University), she graduated with a B.S. in Education in 1961, majoring in Speech and English. She spent much of her time there being in theater and with her sorority Sigma Sigma Sigma. She was a candidate for Miss Emporia State and led her sorority to first place in the Singing Bee.

Ruth taught school in New Haven, CN, Dodge City, KS, Newton, KS, and at the University of New Mexico, while working on a Masters degree in speech. She was director of the UMC Day School at Altus, OK. In Germany she was Religious Education Coordinator at both Rhein Main AB (USAF) and Landstuhl (USA).

As a second career, Ruth, with her husband David, became United Methodist local pastors in Shipman, IL and then in Marissa, IL. She felt this was her most important work and a privilege to share the gospel with others. All of her teaching of Bible Studies, speech classes, and being the leader of Vacation Bible School seemed to come together in her capacity of pastor.

Ruth and David were inseparable, and in later years enjoyed being a part of Shiloh Methodist Church in Shiloh, IL, where she served in leadership of the Stephen Ministry. Her love touched so many lives.
In lieu of flowers, consider donating to Shiloh United Methodist children’s sermon video equipment fund.

Funeral: Private Funeral services were held. Public Celebration of Life will be held at a later date.