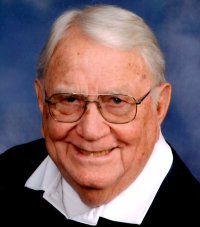 Though Bob was born in California, he moved with his family in 1948 to Hoxie, KS, spending the next 19 years as a Kansan, until the move to Illinois in 1966. He graduated from Sheridan Community High School in Hoxie, Ks, in 1954, received his BS Degree from Fort Hays State College in Hays, KS in 1958 and his MS Degree from Kansas State University in Manhattan, KS in 1969.

Bob was united in marriage on June 17, 1956 in Hoxie, KS to Shirley Lee Conard, the girl that he said he had come all the way from California for. Their three daughters, Mardi Kay, Linda Marie, and Julie Anne were the recipients of the unwavering love of a Dad who was always there for them.

Bob was a teacher and coach of football and track for 12 years following graduation from college. The first 8 were in Kansas at Herington, McPherson, and Hutchinson, and the final four in Illinois, at Belleville Township High School West. The ’69 team that finally brought “The Bell” back to Belleville was the highlight of his time at West.

When he left teaching/coaching in 1970, Bob spent the remainder of his time until retirement in the business world in Belleville. He was with Marsh Stencil Machine Company and Magna Bank, but the majority of his years were spent running his own company, Sales Incentives Plans, Inc.

Over the years he was an active member of the Belleville community, serving as a Ward 4 Alderman for a term and as a board member of a number of Belleville entities: Memorial Hospital, the former Women’s Crisis Center, the Y.M.C.A. and Lake View Memorial Gardens. He also served for a number of years on the Board of Directors of the St. Louis Branch Rickey Chapter of the Fellowship of Christian Athletes, and was honored with the title of Board Member Emeritus. He was also instrumental in planting F.C.A. in the Metro East Area, and served as Board President at its inception.

Memorials: In lieu of flowers, memorials may be made to the Metro East Fellowship of Christian Athletes (www.618fca.org)