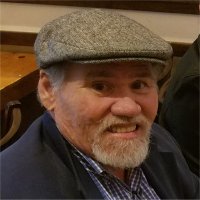 Robert M. Brown Jr. of Belleville, Ill., passed away peacefully to his home in heaven on Sunday July 5, 2020 at his daughter’s home in Antelope, Ca.

Robert was born into a military family and lived in multiple places throughout his childhood. He graduated from Belleville West High and was accepted at Ranken Technical College where he graduated in 1976 with a degree in Architectural Drafting. After working for a few months he left Illinois and headed to the University of Nevada Reno on a boxing scholarship, which eventually led to a Golden Glove Medal. In 1977 he started his long standing career with United Parcel Service and met his wife, Andree shortly after. They bought their first home in Reno and had two daughters before transferring with UPS to Roseville Ca., where he lived for the majority of his career.

Due to his ambitious nature, Bob went back to school and graduated from the University of Phoenix with a masters in business. In his spare time he enjoyed golfing, working on the many muscle cars he owned, vacationing with his family, spending time on his boat, fishing, taking pride in maintaining his home, dancing, listening to music, being silly, and loving his daughters and granddaughter. At the age of 55, and after a 5 year long second marriage to Glenda, Bob decided to enjoy an early retirement.

He served 32 dedicated years with UPS and felt it was time to relax and focus on the things that made him happy. He worked at the car races, enjoyed warm summer nights at lake Carlyle, grilled at backyard BBQ’s, and shared many holiday memories. It was during his time in Belleville that Bob was diagnosed with a rare Neuro degenerative disease, Progressive Supranuclear Palsy. Bob learned to live a new life through his disease back in California with his daughters and other family members close by. He spent his time playing cards, watching his granddaughter play soccer, requesting huge crab and steak dinners, and meeting and holding his new grandson. He fought this disease with all the strength God gave him. He laughed and joked through the whole process, until his peaceful end with his family surrounding him in love.

Bob was preceded in death by his:

Bob leaves us to cherish in memory, countless laughs and values regarding family bonds, having a strong worth ethic, and a selfless “do for others” attitude that made everyone respect and love him dearly.

Visitation: Visitation from 10:00 to Noon on Wednesday, July 22, 2020 at the Kurrus Funeral Home in Belleville, IL

Services: A celebration of life ceremony will be held on Wednesday, July 22, 2020 at 12 Noon, at Kurrus Funeral Home in Belleville, with Rev. Doug Stewart officiating. Interment will follow at Mt.Hope Cemetery in Belleville, IL.