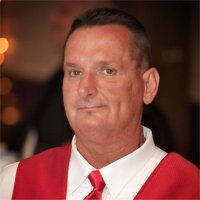 Robert was a security guard for Shop ‘N Save grocery store and had many nicknames including Bigfoot Buck, Dr. Rob, and Goofy.

He had THE BIGGEST HEART, always trying to make everyone smile by giving them wildflowers that he would pick or offering lollipops that he loved. He would pick one flower at a time as he was on his way for a visit with his Momma, he would do the same for the staff when he went for appointments and offered them to folks as he took his daily walks down the sidewalks of Belleville.

The folks of Belleville knew him as the man who walked and helped anyone he could. His day was made when he could help someone in need and bring a smile to them.

His GREATEST LOVE IS HIS DAUGHTER, NICOLE! Oh how he loved that girl!!

He was a Super Fan of The Blues and was ecstatic when his friend Billy Broadhurst would invite him to attend home games – thank you Billy!!

He also loved The Cardinals, The Rams (We know…), horse racing – especially The Kentucky Derby, Big Red soda over ice cream, Sprite, watching The Three Stooges and Urkel on Family Matters. He also loved mini golfing with Nicole and his nephew Christopher.

His LOVE for his PARENTS WAS ENDLESS!!

So in a nutshell, he was a man with a BIG HEART always wanting to help others and cracking us up when you least expected it!

He definitely had strong opinions of worldly events and no problem expressing them on social media – that’s also where you would see his kind heart shine through. He was always sending uplifting words to those who needed them on a daily basis and you could tell he was genuine in his words and would always sign his name “Buck”.

On the flip side, talk about a man with a temper. If somebody was trying to harm another human being he would put himself in harms way for a total stranger and did so numerous times in very dangerous situations. He was even a “security guard” on the streets!

Memorials: Memorials may be made to the St. Jude Children’s Research or Belleville Area Humane Society.