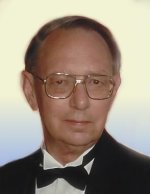 Robert graduated from Lower Hepsoda School, a one-room grade school in Dent County, MO, and from Licking High School in Licking, MO. He served in the U.S. Army from 1953 to 1955, attaining the rank of Corporal. After earning a B.S. in Civil Engineering from the Missouri School of Mines and Metallurgy (University of Missouri-Rolla) in 1961, he worked for Standard Oil Company of Indiana (Amoco) in sales and product engineering.

While working full-time at Standard Oil, Robert attended The John Marshall Law School in Chicago, graduating in 1973. From 1974 through 1983, he served as a St. Clair County, IL Assistant State’s Attorney. He was appointed as Associate Judge by the Circuit Judges of the 20th Judicial Circuit in 1983, and served in that position until his retirement in 1997.

Memorials: Memorials may be made to the Land of Lincoln Legal Assistance Foundation.