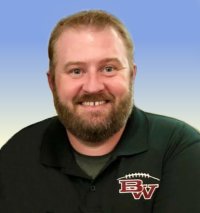 Bob graduated from Freeburg High School in 1999. He graduated Southern Illinois University – Edwardsville with a Bachelor of Science degree and was currently near completion of his Master’s degree. He began his teaching career as a Student Teacher at Belleville West High School but his talents were duly noted within weeks and quickly was offered a full-time position as a Science Teacher in 2006. As a former football player both at Joliet Catholic Academy and Freeburg, Bob soon was offered a part time coaching position at Waterloo High School under Coach Dan Rose. After only two seasons at Waterloo High School, he was offered a full-time coaching position at Belleville West. He was Head Coach for the Junior Varsity team for several years before being elevated up to the Varsity team to which Bob held numerous positions to include Offensive Coordinator calling the plays for the MIGHTY MAROONS!

After 16 years of coaching for the Maroons, he stepped down as now his children were in grade school and he wanted to dedicate more time to them. As evident of the thousands of comments made on Facebook, he was adored and more importantly respected by his players, students and faculty alike. His Leadership abilities were recognized and he was promoted to Chairman of the Science Department all along still coaching – he spent an enormous time serving Belleville School District 201. In recent years he was a baseball coach for his young son’s team. Bob was also a member of St. John’s Catholic Church in Smithton, IL

He is preceded in death by his:

Belleville West has truly lost a devoted teacher, mentor and friend. He will be remembered for his sense of humor and his ever-enduring smile. Daily when asked how he was, Bob would always say, “I’m Living the Dream!” But make no mistake, Bob was first and foremost a Father and a Husband – his family was his #1 Priority!

In lieu of flowers, Memorials can be made to the Flake Children’s Education Fund with checks payable to: Angela Flake as well as the Bob Flake GoFundme.com found on Facebook.

Visitation and a “Celebration of Life” will be held at Belleville West High School campus located at 4063 Frank Scott Pkwy W, in Belleville, IL from 11A to 3P on Saturday, January 8, 2022.

Private Memorial Service will be held at 4p at Belleville West High School with Pastor Matt Friz officiating. A Private Family Interment will take place at a later date.

*Live streaming of the Memorial Service will be available at the time of the service.  https://youtu.be/Hl-xximiQHM