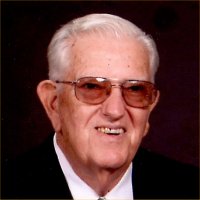 Bob was the Owner of Elder Cadillac. He was a member of St. Matthew United Methodist Church in Belleville IL. He was a heavy equipment operator in the United States Seabees. He worked for E.B. Jones in 1950 until 1966 where Jones backed Bob in building his own Cadillac dealership. Bob was also a member of Sons of the American Revolution, Lifetime member of the St. Louis Auto Racing Club, Cadillac Dealer of the Year in 1994 and Rotarian of the Year in 2003. He was in the National Guard and served as a Veteran of the U.S. Navy.

Bob was a gracious warmhearted loving husband, father, grandfather and friend to many. His love for racing was endless as he never missed a race on TV and enjoyed going to his beloved Sprint Car races. Bob was very proud of his #55 Sprint Car which won 18 National Championships and competed in 116 feature races. Bob was raised on a farm in Villa Ridge, MO until age 18. He was a farmer at heart and loved going to his farm in Villa Ridge, MO and driving his tractors. Bob was also a Rotarian with St. Clair County West and was the King of Chili Day for many years. He did volunteer work for both the Violence Prevention Center and the American Cancer Society. Bob had the gift of gab and enjoyed talking to whomever he met along his journey and never met a stranger.

The family would like to thank his faithful caregivers; De Gimpel, Kathy Rauk and Nancy Hartmann for all the care they gave Bob. Special thanks to Sis Briley for her support.

Memorials: Memorials may be made to the Hospice of Southern Illinois or St. Matthew United Methodist Church.