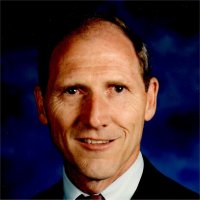 Bob Crawley’s Career spans nearly forty years all with Sverdrup Civil Inc. in St. Louis, Missouri. Commissioned in the NROTC program at Purdue, Mr. Crawley served two years in the U.S. Navy after graduation, then earned his master’s in civil engineering from the University of Illinois. Joining Sverdrup in 1964, he initially worked on the bridge design and detailing, then planning and designing ports and marine facilities. He was the design engineer for Indiana’s Burns Waterway Harbor on Lake Michigan, and design manager and construction supervisor of the $250 million harbor facilities expansion and supporting infrastructure in Shuaiba, Kuwait.

In 1981 he joined a ten-person delegation to the People’s Republic of China, advising the government on the Yangtze River Three Gorge project. In 1985 he was named vice president for Sverdrup’s Civil Inc.. He also served as deputy associate director of the Conventional Construction Division for the Superconducting Super Collider project near Dallas and he was a registered professional engineer in Illinois, Indiana, Iowa and Wisconsin, and a licensed Structural Engineer in Illinois. He is a fellow of the American Society of Civil Engineers and served as St. Louis Section president in 1996/1997. He is also a fellow in the Society of American Military Engineers and served as St. Louis Post president in 1991/1992. Bob was a life member of the Rotary Club of St. Louis and Signal Hill United Methodist Church.

Memorials: Memorials may be made to the Michael J. Fox Parkinson Foundation, www.michaeljfox.org/donate and Dammert Geriatric Center.