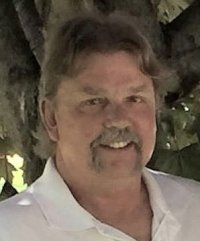 Rob was a maintenance tech for the City of St. Louis at St. Louis Lambert International Airport, a member of St. Clair Lodge #24 AF & AM and a Navy Veteran. He had a passion for life like no other. He lived life to the absolute fullest. From skydiving to traveling to new places, he was always up for an adventure.

In his free time, Rob enjoyed riding his Harley, listening to live music, and watching sports. He was a life long St. Louis Cardinals fan and enjoyed watching the Kansas City Chiefs play.

Affectionately known as “PawPaw”, he cherished every moment with his grandkids. His greatest joy in life was spending time with beloved family and dear friends. He was the life of the party and brought immeasurable smiles and laughter where ever he went. Rob never met a stranger and always believed in helping those in need. He would give the shirt off of his back if he knew someone else needed it more than him. Everywhere he went he left a lasting impact on those around him.

His giving spirit and kind nature will live on even in his passing. As an organ and tissue donor he was able to give the gift of life to several people in need. All donations made to St. Clair Lodge #24 will go to a scholarship fund in his honor.

Memorials: Memorials may be made to the St. Clair Lodge #24.