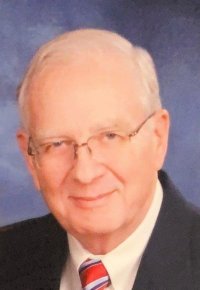 Before his retirement Richard worked for Jacobs Engineering (formerly Sverdrup) as a Project Engineer, Resident Engineer, and Construction Manager from 1984 until 2001. He completed construction projects in Altavista, VA; Bowling Green, KY; Ellisville, MS; Kenosh, WI, Granite City, IL; and St. Louis, MO.
Richard was commissioned as a 2nd Lieutenant in the Air Force in 1961 and retired in 1984 from the Military Airlift Command Headquarters, Scott AFB, as a Major. He obtained dual aeronautical ratings of navigator and senior pilot. He served at various locations in the United States, South Korea, and Germany as a B-52 Navigator, C-141 Pilot, HH-43 (Rescue) Helicopter Pilot, and Civil Engineering Staff Officer. He served in the Vietnam War and was awarded the USAF Meritorious Service Medal six times.

Richard earned his BS in Mechanical Engineering at Penn State University in 1961 and his MS in General Management from the University of Arkansas in 1974.

Richard was a loving husband, father, and grandfather who dedicated his life to his family and his country. He will be dearly missed by all who knew him.

Memorials: Memorials may be made to Vitas Hospice in Fairview Heights, IL