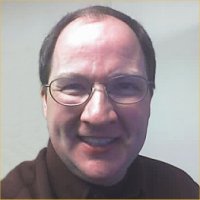 Richard was raised and lived in the Belleville, IL area for around 30 years, developing his IT programming and analysis skills. Richard lived in Hillsboro, OR for over 20 years working as a senior IT architect for Columbia Sportswear. Richard loved his work and enjoyed his time in the Pacific Northwest. During that time, Richard cared for his mother following the death of his father. After retirement, he settled in Springfield, MO, worked full time in the IT department for Redneck Trailer Supplies and was very active in Queen of All Saints Catholic Church. He relocated to the St. Louis area a few years ago to be treated for a rare cancer that finally took him.
Richard enjoyed years of amateur astronomy including building his own telescopes. He was an excellent photographer of landscapes and vast expanses of scenery that reflected his love of the outdoors. He also was skilled in woodworking and created numerous pieces of fine furniture that will provide many years of living legacy.

Memorials: The family requests that Memorials be made to the Lymphoma Research Fund at the BJC Hospital Group.

Services: Visitation will be held from 9:30am to 10:30am on November 15th at St. Francis de Sales Oratory Church, 2653 Ohio Ave. (at Gravois), St. Louis, MO, followed by a Requiem High mass and interment at Resurrection Cemetery.