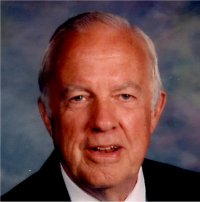 Richard Custer May, 92, of Belleville, Illinois, died on October 21, 2020, at Memorial Hospital in Belleville, IL.

Richard was born on August 12, 1928 in East St. Louis, IL to George P. and Ruby (Custer) May, whom preceded him in death. On August 31, 1953 he married Roberta Lyon of Lake Arthur, Louisiana, who passed away on December 30, 2005. Richard was also preceded in death by a brother George P. May, Jr. and a sister, Marjorie “May” Yund.

Richard attended East St. Louis public schools, graduating from East St. Louis Senior High School in June of 1946. He attended Belleville Junior College (now Southwestern Illinois College) from 1946 to 1947. In the fall of 1947 he transferred to Washington University of St. Louis, MO, where he received his A.B. Degree in 1950 and an M.B.A. in 1956. Richard served in the US Army from November, 1950 until discharged in August, 1952. He saw duty in Korea as a Sergeant with the Headquarters Battery, 49th Field Artillery Battalion, 7th Infantry Division from April, 1951 to January, 1952. Richard joined State Savings and Loan Association of East St. Louis, IL in 1953, becoming President of that organization in January, 1967 and continued in that capacity until 1980 when he was elected Chairman of the Board of, Illini Federal Savings and Loan Association. In 1990 Illini merged with First Financial Bank of Stevens Point, WI. He remained with this organization as an Executive Vice President for a short time, retiring on June 1, 1990 after completing 37 years of combined service. During his career he held many posts related to his profession. These including Director of the Federal Home Loan Bank of Chicago, President of the Illinois Savings and Loan League and Member of the Executive Committee of the United States League of Savings Institutions, among others. He was a member of St. Matthew United Methodist Church and the Gideons International. Richard served with many community organizations during his career, including President of the St. Clair County United Way, President of the Okaw Valley Council, Boy Scouts of America, and Chairman of the Southwestern Illinois College Foundation. He was a long time member of the St. Clair Country Club and the Missouri Athletic Club.

In lieu of flowers, memorials may be sent to donor choice.