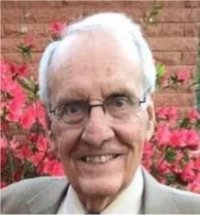 Richard B. Baltz, died at the age of 91 on May 9, 2021. Richard was born in East St. Louis, IL on July 27,1930, to Arthur W. Baltz and Ollie Batdorf Baltz. Growing up in East St. Louis during the Depression, Richard began delivering groceries for the neighborhood grocer in the first grade with his twin brother, Howard. After graduating high school, they enlisted in the Air Force, where Richard served as a navigator.

Richard pursued higher education while serving in the Air Force, earning a Bachelor’s degree at Baylor University and a M.A. and PH.D. in Economics at the University of Arkansas. He taught at several colleges and universities, spending a 24-year tenure at Millsaps College. He served as the director of the Small Business Development Center and Foreign Trade Institute and was appointed by the U.S. Secretary of Commerce to serve on the District Export Council of Mississippi. Richard co-authored two college textbooks and was awarded Professor Emeritus status upon retirement in 1990.

Perhaps Richard had the most fun in retirement using his Space-A military benefit to travel worldwide with his wife, Susie. Visiting Europe, Russia, China, Egypt, Israel, Morocco, Thailand, and Mexico.

Richard is survived by his wife of 43 years, Susie (Jenkins) of Jackson; his daughter, Cyndi Hargrove (Tim); older brother, Fred; twin brother, Howard (Sylvia) and a host of nieces and nephews. Richard was a loving and caring husband, father, stepfather, brother, uncle and Opa and he was beloved in return.