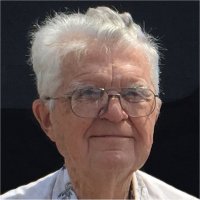 Ralph Dempsey Crago, 96, of Swansea, Illinois, born Saturday, September 15, 1923 in Chillicothe, Ohio, peacefully entered his heavenly home on Friday, July 3, 2020 at home in Swansea. He was the son of Arthur H. Crago and Carrie B. nee Dempsey of Chillicothe, Ohio. He had a long, happy marriage of 63 years to Edith Mae McKean from Warren, Ohio.

Ralph was a veteran of three wars, WWII, Korea, & Viet Nam. He served as a pilot in the Army Air Corps and later in the United States Air Force. He remained in the Reserves after WWII and when called back to serve during Korea, he decided to become a career officer in the USAF. He spent his Air Force career in Air Weather Service serving in Nashville & Knoxville Tennessee; Anderson AFB, Guam; Offutt AFB, Nebraska; USAFE headquarters, Wiesbaden, Germany; and Scott AFB, Illinois. While stationed on Guam, a major part of his job was to fly WB-50’s into typhoons to gather weather data, many times flying home on a “wing and a prayer”. He retired in 1968 as a Lieutenant Colonel. After his military career, he was employed as a vocational rehabilitation counselor for the State of Missouri for 17 years.

Ralph was a graduate of Centralia High School in Chillicothe, Ohio. He was the last surviving graduate of the Class of 1941. He attended The Ohio State University for 3 1/2 years when he was called back to serve during Korea. He completed his Bachelors in Mathematics at Maryville College in Tennessee and later received a Masters in Guidance Counseling from Southern Illinois University Edwardsville.

He was a life-long Methodist and a member of Union United Methodist Church in Belleville, IL. He served alongside his wife as Sunday School superintendent and Youth group leader in multiple churches and was active on many Boards and committees within the church. He was a member of the American Legion, VFW, and Retired Officer’s Association.

Ralph was a farm-boy at heart, an avid reader, rarely missed an Ohio State football game, and loved being with his family. Though very quiet in nature, even until his last days, he was quick to provide sage advice to his sister, children, and grandchildren. One of his Air Force ER’s stated that “when Ralph speaks… you better listen.”

Memorials: In lieu of flowers, memorials may be made to the Union United Methodist Church — Music Ministry, or the Wounded Warrior Project.

Funeral: Funeral services will be held at 1 p.m. Monday, July 13, 2020 at Kurrus Funeral Home with Rev. Dennis D. Price officiating. Interment will be held at Grandview Cemetery in Chillicothe, Ohio on Thursday, July 16.