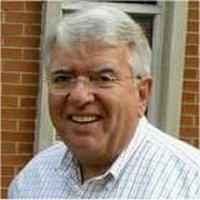 He is survived by his wife, Kay; 2 daughters & son-in-law, Kristin West and Kimberly & Matt Lehnen; Grandchildren Mary & Zack Lehnen, all of Bethalto, IL; 2 Brothers & Sisters-in-Law Michael and Sandy West of Saratoga, CA & John and Robin West of Chandler, AZ; Sister-in-Law Carolyn Buchholz of Bethalto IL; 7 nephews and 2 nieces, along with their families.

During his years as a Pastor, he was able to minister to many people in their time of need and also celebrate with them in the happy times. He loved to travel, tell “bad” jokes, root for the St. Louis Cardinals, and go out to dinner with his family & friends.

A private family service will be held. A Celebration of Life will take place at a later date. In lieu of flowers, memorials may go to his first church, Towerview Baptist Church 2401 Lebanon Ave Shiloh IL 62221.