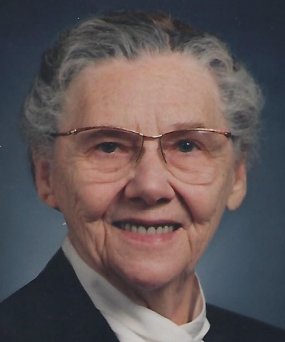 Ollie Lucille Walker, 109, of Fairview Heights, IL, passed peacefully into the arms of Jesus Friday, September 2, 2022 in Belleville Memorial Hospital. She was born February 27, 1913, to and raised by her parents, Henry III and Zora Mae (nee Logan) Rendleman atop Bald Knob Mountain near Alto Pass, IL. In 1933, she married William C. Walker. Together, during 48 years, the first 30 in East St. Louis, IL, they raised their four children: Clarence, Phillip, Charlyn Reece and Janis Schmelter.

Exclusively a homemaker until her mid-40s, she worked briefly at Famous-Barr, then trained to become a Licensed Practical Nurse, a career she enjoyed nights for twenty-five years at Centerville Township Hospital until retiring at age 73. She was a doting and caring parent and grandparent, loved and fondly remembered by her grandchildren, particularly Ron Weaver, a devoted caregiver over the last four years of her life.

Always devoted to her Pentecostal faith, she was a notably well-regarded and popular member of the various congregations to which she belonged throughout her life.

The family wishes to thank the staff and doctors of Unit 400 of Memorial Hospital for their kind, diligent care during her final days there.

The family believes that as a supporter of several charities, she would ask any memorials go to the charity of your choice, in her name, please.