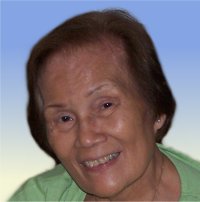 Naty was born and raised in the Philippines. She was a daughter of hard-working school teachers. Her parents instilled a strong work ethic and empathy to helping others in her from a young age. She became a nurse and met her late husband, Robert while he was stationed in the Philippines. Naty moved to the United States with Robert and started their married life and family.

Naty was a registered nurse for 30 years at Memorial Hospital in Belleville, IL. She was a member of St. Peters Cathedral Church in Belleville, IL and a volunteer at Our Lady of the Snows National Shrine.

Memorials: Memorials may be made to the Hospice of Southern Illinois.