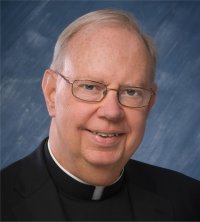 He attended Assumption High School in East St. Louis. He earned a Bachelor of Arts Degree from St.Louis University. He worked as a social worker with the Missouri Division of Employment Security and the Illinois Department of Public Aid. He began his seminary studies at St. Henry Seminary in Belleville and completed them at Kenrick Seminary and St. Louis University School of Divinity in St. Louis where he earned a Masters of Divinity Degree. He was ordained by Bishop Albert Zuroweste to the priesthood on June 5, 1971.

He served as the associate pastor of Blessed Sacrament Parish in Belleville before being assigned in 1975 to Angelicum University in Rome where he earned a license in Canon Law in 1977. He worked in the diocesan Marriage Tribunal and was named diocesan Family Life director. Bishop John Wurm named him the Vicar General of the Diocese and Moderator of the Curia in 1983.
During Bishop Wurm’s illness he was named the apostolic administrator of the diocese and the administrator of the diocese after Wurm’s death. He served as the administrator of the diocese on two other occasions after the transfers of Bishop James Keleher and Bishop Wilton Gregory.
Msgr. Margason served as the Vicar General and Moderator of the Curia for Bishop Keleher and Bishop Gregory from 1984 to 2005, except for four years after 1990 when he resigned from his diocesan offices to devote his full time to pastoral responsibilities. For 20 years, he served as adjunct professor of Canon Law at Aquinas Institute of Theology at St. Louis University. He was named a monsignor in 2000.

Jim loved to golf, travel and cook, and relished thoughtful conversation over a glass of wine. His greatest love was his final ministry to his parishes in Shiloh and Lebanon, and they in turn showered him with love and support. Even in his struggles with health they kept him in good mind and spirit towards the end.

In lieu of flowers, memorials may be given to Corpus Christi Church in Shiloh, IL or St. Joseph Church in Lebanon, IL.

A live stream can be accessed at: