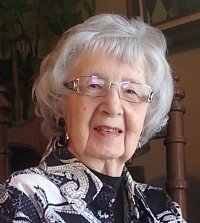 She was a true helpmate in ministry to her husband, Rev. W.E. Reynolds, who predeceased her. Besides her parents and husband, family members who passed before her were her brother, Donald V. Rouch, and her sister, Dorothy Rouch Smith. She is survived by: Gregg Reynolds of Tucson, AZ; Cheri (Terry) Trusty of Edwardsville, IL ; W. Brent Reynolds, Palm Springs, CA; grandson Tyler Trusty, Edwardsville, IL; brothers- and sisters-in-law; nieces and nephews.

Miriam was raised in McCook, Nebraska. Her father wanted her to grow in the arts, and took her to her first orchestra concert. She also got to see Spike Jones. Miriam’s mother also wanted her to have certain appreciations. Hazel would take Miriam to Denver, and they would eat at a place on 16th St. Miriam said there was an organist that would perform while others dined. She showed ability with the piano, and her dad bought her a Chickering Grand piano, when she was 13 (which she owned until the 1970’s). She performed all over Nebraska while still in high school. Miriam went to some summer music camps at Estes Park. She played baritone and trumpet, besides keyboard.

As a teenager, she hung around with the kids from the McCook Assembly of God church. During this time, Wes wooed her. They would go to football games together, while playing in the band. After Miriam and Wes married in 1948, they stayed for awhile in her parents’ apartment house basement. Then they went to Springfield, MO. She went to Central Bible Institute, then transferred to Drury College, and took organ lessons. Wes and Miriam’s ministry was with the Assemblies of God.

In the Reynolds’ first pastorate in Hershey, Nebraska, Miriam put her organ background to good use. She gave organ lessons, then organized, in that rural area, an ‘organ orchestra’. She and her students, many who were farmers’ wives, would load their spinet organs in the backs of pick-up trucks, go to school gymnasiums, and perform in ensemble. They played such pieces as ‘Tico-Tico’, ‘Ebb Tide’, and other popular pieces of the day. Then the ladies (and their husbands) would re-load the organs and move them back home. There was also the day Miriam wanted to practice organ, and the town bank let her use theirs. What she didn’t realize was it was hooked up to a carillon, and as she ripped through her piece, ‘Tico-Tico’ was going through the town- until a bank teller ran in to stop her.

The ministry next took them to Mitchell, Ne. Besides accompanying church and directing choir, Miriam sold sheet music and pianos at Schmoeller-Mueller Music Store in Scottsbluff, Ne. Miriam could wheel and deal with the best of them, and she enjoyed it.

Omaha, Ne., about 1961, was the next calling, to Southside Assembly of God. She built up a choir, and began to bloom as an arranger. This is where she became ‘a music minister before there was such a title.’ Miriam developed an orchestra for Sunday evening service. Sunday morning she would check with her musicians to see who would be attending, and spend Sunday afternoon arranging and hand-transcribing music for those that might attend. This included transposing keys for certain players, and charting for guitar and accompanist. She then built up a violin section by teaching violin on Saturday mornings. Also in this pastorate, Miriam started involving the musicians in the Teen Talent competitions of the Assemblies. An abbreviated time in Cedar Rapids, IA. was the next ministry. Here, Miriam got her two older children scholarships to start harp lessons through the school system, which influenced their lifetime paths.

Miriam and Wes next answered the call to Belleville First Assembly of God in Illinois. It was here that the church board, after some wrangling, agreed to pay Miriam as music director. She developed a cadre of accompanists, using two old upright pianos for youth service. One experienced pianist would provide accompaniment, as another novice learned to play along. Miriam also continued working with instrumentalists and singers in the Teen Talent ministry, winning at state, regional, and national levels. She usually arranged for whatever mix of players and singers were available. Miriam and Wes were involved in district-wide ministry with the Assemblies of God, and Miriam was state- music director for a time. She was called on to accompany Happy and Vestal Goodman at camp one year. Miriam also produced an album, utilizing various ensembles from the local church. While in Belleville, Miriam supported other local entities, including the Belleville Philharmonic, and the music departments of the high schools her kids attended.

In 1985, Miriam and Wes answered the call to Ottawa, Ks. Here she continued to support the ministry with music. While in this pastorate, Wes was diagnosed with cancer, and the couple retired to Springfield, Mo. in 1992. Still not ready for the ‘golden years’, Miriam taught strings and piano to upcoming ministry students at Central Bible College for a time. In 2002, the Reynolds moved to Maranatha Village in Springfield. Miriam stayed there after Wes’ passing in 2017. In 2021, medical needs led to her moving to the Villas of Holly Brook in Bethalto, IL. To the very end, Miriam entertained the caregivers and other residents with her keyboard playing and personality.

Memorials: Donations may be made to Maranatha Village Chapel ministry, of Convoy of Hope, Springfield, Mo.

Services: A service for Miriam Reynolds will be held Monday, Jan. 16, 2023, at Kurrus Funeral Home in Belleville, IL. Visitation is from 1-3 pm. with a service at 3 pm, officiated by Rev. Dale Edwards. Miriam will be interred in the Missouri Veterans Cemetery, and there will be no graveside service.