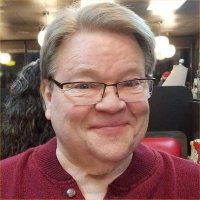 Left to cherish his memory are his:

He will be greatly missed by his cats Pele, PopTart, Soska, and Gregor.

Special Thanks: Our family would like to thank Mike’s friends Bob, Ed, Norma, Rick, and Patrick for all their support during this time.

Mike was born in Mt Vernon, IL but spent most of his childhood in Washington Park, IL. As a young boy, Mike always had some sort of pet in the house, lizards, snakes, fish, hermit crabs, hamsters, gerbils, an iguana, he even captured a field mouse once and named it. Cats were his passion and love later in life.

After High School, Mike attended and graduated from SIU Edwardsville with a BS in Music and minor in Biology. As his sister, Mike taught me a lot about Music and Science. He had a beautiful tenor voice and I was privileged to sing many duets with him. He lead music in several churches and eventually went on to receive his Master of Divinity from Midwestern Seminary.

As a brother, he was always very supportive and proud of all my endeavors. He always encouraged me to do my best and was willing to help me achieve my goals. He also included me in many of his basement Science experiments. He would try to teach me basic Science lab techniques which often ended in laughter or running to get something to clean up the mess. There are many stories about close call Science experiments.

There was not a hobby or a subject that he did not dabble in at one time or another. He loved photography, music, theatre, astronomy, gardening, cooking, robotics, electronics, calligraphy, traveling, reading, walking, and hiking just to name a few.
He was always looking for something new to learn and explore. He loved adventure and often invited others to join him. His love for rollercoasters took him to many amusement parks throughout the country. I was fortunate to join him on several of those adventures.

He held several degrees including a BS in Music, Master of Divinity, Master of Social Work, and a Paralegal degree. His degrees took him many places including Nashville, Tennessee where he worked as a WATS line salesman for the Benson Music Corporation. There he set a sales record that still stands to this day. His goals were simple…do your best, be the best at what you do.

He recently retired from BHR as a Crisis Intervention Counselor. He was enjoying retirement immensely. Mike was a kindhearted soul who never met a stranger and was a friend to all. Even as a child, my parents told stories about Mike striking up complete conversations with strangers even at stoplights and that was to share he had a new baby sister.

He will be missed by family and many friends.