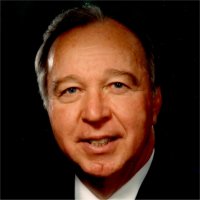 He was commissioned 2nd LT and received his pilots wings in 1944. He was a 8-17 Bomber Pilot in WWII. He flew 33 missions with the Eighth Air Force in the European Theater. He was awarded the Air Medal with four Oak Leaf Clusters.

Mr. Bone started practicing law in East St. Louis, Illinois in 1953. In 1967, he moved his law firm to Belleville, Illinois where he practiced until his retirement in 2005. His primary focus was representing injured workers.

He was a member of the Board of Directors of the Bank of Belleville and Magna Bank, predecessors to Regions Bank

He was an avid golfer playing courses all around the world with anyone willing to play with him no matter what ability level. He was a proud member of St. Clair Country Club and on May 20, 2006 at the age of 82, he accomplished one of the hardest things to do in sports by shooting his age.

He was preceded in death by his wife, Phyllis nee Frick, who was the mother of his four children; Dorothy, whom he married in 1998; brothers, Howard, who was killed in action in WWII and Robert who passed away in 1995; a niece Jackie Borowy and his parents Margaret and Edgar Bone.

He is survived by his four sons, Steve, Greg (Nancy), Larry and David; his four grandchildren, Dylan (fiancee Kari), Blake, Taylor and Phillip; and his nephew Robert “Butch” Bone.

Memorials may be made to Land of Lincoln Legal Aid, Siteman Cancer Center or to a charity of your choice.

Private family services to be held at a later date.