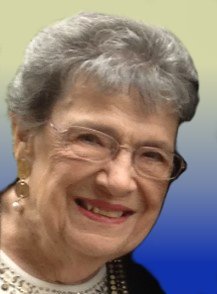 Marylin was born on October 14,1932 to Royal and Clara Hoffmann, nee Meier, in Belleville. She was a graduate of the 1950 Class of Belleville Township High School. Her mother died when she was very young. Her father married Florence in 1953. Marylin and her stepmother shared a very close relationship.

Marylin married Jim DeVan on June 18, 1954, in Corinth, MS prior to his 15-month deployment overseas. Marylin worked for NolKemper Insurance Agency at the National Stockyards from high school until the birth of her first of four children.

Jim went into business for himself, opening DeVan Automotive Service in 1968. Marylin was equally involved as his biggest supporter providing her bookkeeping talents for over 50 years and accommodating his late nights at work.

As a young family, Marylin, Jim and their children spent weekends, vacations and holidays with her father and stepmother. When her children were in grade school, Marylin was active in PTA and Mother’s Club, supporting the school in any way asked. She became “Mom” to numerous neighborhood children welcoming them into the home with a smile, kind words and meals.

Marylin was an outstanding seamstress, cook and crafter. From 1985 to 2002, she participated in craft fairs bringing her much joy. She also loved chocolate, wine and jigsaw puzzles.

She and Jim enjoyed evenings out with friends, dancing (in earlier years) and dining out. For 67 years, Marylin was fortunate to have the friendship, love and support of a group of ladies affectionately known as the “Club Girls.” They met monthly at each other’s homes and later enjoyed each other’s company at restaurants. When she could no longer attend, they came to her.

Marylin’s greatest joy was her grandchildren. She lit up when they were with her and couldn’t conceive of anything more special when they visited.

Marylin was a devoted daughter, wife, mother, grandma and friend. Marylin was kind, generous, light-hearted and good-humored. She was a friend to everyone, loved by many, and will be terribly missed.

Marylin is survived by her husband, Jim, of 65 years; her four children: Alan and Dale of Belleville, Linda Fix (Tom), Carthage MO, and Gail Hunter (Marc), Highland IL: her grandchildren: Allison and Katie Fix, Alexandra and Mitchell Paulson, and Will Hunter; her aunt Barb Hoffman with whom she was raised and considered a sister. Additional survivors include sisters and brothers in law, nieces, a nephew and cousins.

Preceding Marylin in death were her parents, stepmother, and a sister, Carol Daab.

Marylin donated her body to Washington University School of Medicine. As she wished, a memorial service and luncheon in celebration of her life will be held at The Weingarten on Friday, August 16 from 11:00 am – 2:00 pm. The service will begin at 11:15 am followed by the luncheon. Family and friends are invited to attend.