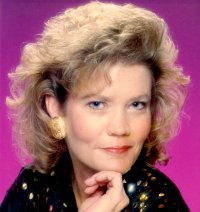 Mary Theresa “Teri” Morgan, nee Cochrane, 66 of Belleville, IL, was born August 18, 1954 in Urbana, IL, and passed away on April 21, 2021 at Belleville Memorial Hospital. Teri was born in Urbana Illinois and raised in Carbondale, IL.

She accomplished many firsts in our family, since she was the big sister – first to graduate from high school, CCHS 1971; first to graduate college earning her BS and MS from SIU in Speech Pathology and Audiology; she was the first to get married. She married her high school sweetheart Tom in 1976 and they have been married just a month shy of their 45th wedding anniversary. She worked at Belleville Memorial Hospital. She and her husband Tom enjoyed traveling and had visited many places domestically and traveled to Europe multiple times. Teri became an avid knitter and crochet-er, experimenting with new patterns, colors and designs. Teri was an avid gardener and spent many of her happiest times in her backyard surrounded by her flowers and her beloved boxers which she raised for most of her adult life. Her current canine companion Bella was constantly by her side. Teri was a delight to be around and her wicked sense of humor was made even more so with an occasional margarita (the big size). Her beautiful smile and the twinkle in her eye will be missed tremendously by her family and all who knew her. Teri will be forever remembered by her devoted husband, Tom, her sisters, Peggy, Patti and Helen.

Teri was preceded in death by her: