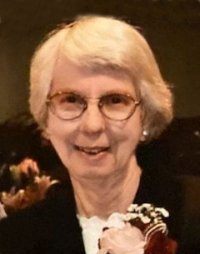 Known to all her friends and family as Pat. Pat was born and raised in North Carolina. She graduated from Columbia Bible College and taught grade school for a couple of years before meeting and marrying a handsome young man from Illinois. She put many of her other hopes and dreams on hold as she became a mother to four and worked hard to be the best wife and mother that she could be.

Her family and friends all knew her to be one of the sweetest, godliest, most merciful and caring people in the world. Some even called her a saint. Pat volunteered in many behind-the-scenes opportunities to serve at her church including hospitality, visiting the sick, camp work, and grading Bible lessons sent in by incarcerated people trying to learn a better way of living. She had a beautiful Alto singing voice and an ear for music that caused her to harmonize perfectly in church services.

Music was very much a part of who she was, and her children and grandchildren remember her breaking into little ditties and folk songs at random times, smiling and enthusiastic as she sang.

Even in the last few years as her health declined, her sweet spirit, wit, musical gift, and the faith that she had lived for so many decades still rose to the top with nurses and doctors and all who came into contact with her. On the morning of September 22, 2022 the Lord welcomed her home. She no longer is suffering. She stepped from being 89 into the rest of her ageless eternity. She most surely is laughing and singing with those who have gone on before, home at last with the Lord she loves.

Memorials: Memorials may be made to www.brighthope.org Dedicate Donation in Memory of Mary Patricia Falconnier

Funeral: Funeral Services will be held at 11:00 am, Friday, September 30, 2022 at Kurrus Funeral Home with Scott Renth and John McCarey officiating. Interment will follow at Highland City Cemetery, Highland, IL.