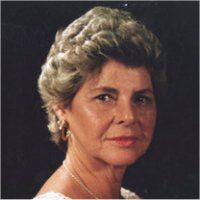 Liz was born on July 28, 1924 to Charles and Amanda Harding in Lexington, KY. After graduating from Lafayette High School, she went on to her first job at Western Union.

In 1945, she met Robert B. O’Neal and they wed in June of 1946, going on to have three children, Linda Sommer (nee O’Neal), Robert C. O’Neal, and Peggy Ann O’Neal-Sacks. Liz resided in Belleville for 74 years. Liz was the definition of help and hospitality. She was the constant companion and assistant behind every adventure her marriage presented, from being the wife of a New York Yankee to caring for her husband in his declining years. After a career in baseball, Liz and Bob returned to Belleville to start several businesses: Style Cleaners and Laundromat (1957), My School (1969), O’Neal Petroleum Inc. (1982), Augustine’s Restaurant and Motel (1992). After retiring from family business, Liz was an associate at Dillards for ten years.

In addition to the role of helper, she dedicated her life to being a wonderful mother, grandmother, sister, aunt, friend and church member. Liz excelled at supporting family and friends through the many hills and valleys of their lives. Whether that was supporting her spouse through a difficulty or helping a friend, she made it her mission to improve the lives of others.

Liz was a passionate about cooking, gardening and oil painting and when she wasn’t filling her home with warmth and kindness, she could be found playing bridge, golf or volunteering at the Shelter Shop.

Liz was preceded in death by her:

Memorials: The family requests that tributes be in the form of donations or contributions to the Shelter Shop, 19 Bellevue Park Place, Belleville, IL 62226.

Services: There are no services at this time. A Celebration of Life will be scheduled later in the year 2021.