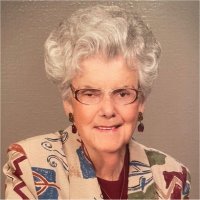 Jane started her career at Scott Air Force Base, IL where she worked for 22 years and retired as a Management Analyst Officer in 1974. She then went on to become a very successful district manager for AFLAC.

Jane lived in Mascoutah, IL for much of her childhood and later moved to Belleville, IL. In 1991, Jane married Virgil “Mac” McConnell and moved to Cooper Landing, AK, where she lived for 16 years. In 2006, Jane and Mack moved to Swansea, IL to be closer to her family. In 2016 Jane moved to Colonnade Senior Living in O’Fallon, IL and then moved to Villas of Hollybrook in Belleville, IL in May 2021. Jane also loved to travel and traveled extensively throughout the United States and the world.

Jane was a member of Rob Morris Chapter 98 in The Order of the Eastern Star. She was Worthy Grand Matron of the state of IL in 1977. In 1988 Jane was appointed Worthy Grand Esther of the General Grand Chapter and served in that position from 1988-1991.

Jane was preceded in death by her: