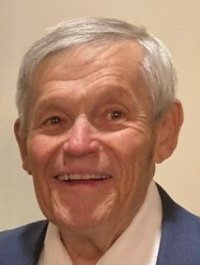 Lawrence “Fran” Francis Stuart, 76, of Leesburg, VA, passed away unexpectedly on Dec. 28, 2022, surrounded by his family after a sudden illness. Born on October 20, 1946, to Lawrence P. and Hazel (Hobbs) Stuart, he grew up in East Saint Louis, IL, and graduated from East Saint Louis High School.

Fran was a 1977 proud alumnus from Southern Illinois University Edwardsville. He enjoyed telling stories about his adventures in Edwardsville, especially as the caregiver for the university’s mascot, a cougar named Chimega.

After college, he worked for Monroe Calculator and CashEx. He lived in Saint Louis, Dallas, Milwaukee , finally settling in Leesburg, VA with his career at EDS. He retired from Hewlett Packard in Herndon, VA.

Fran was often described as being larger than life with a great sense of humor and was always ready to tell a funny story or joke. He was an accomplished nature photographer. In his youth, he played basketball and baseball. Fran enjoyed watching football and soccer. He had fond memories of hiking and traveling in the Midwest with a buddy and backpacking through Europe in the 1960s. Fran was an avid reader of Syfy and science. He volunteered in many capacities at Church of the Holy Spirit and with the Leesburg Rotary Daybreak.

A few years into retirement, Fran rejoined the workforce part-time as the evening barista at the at The Buzz inside the Village of Leesburg Wegman’s. He loved interacting with his coworkers and getting to know the “regulars” at the coffee shop. Fran lit up whenever he talked about his time at Wegmans.

Fran would often sit on the back porch, on the look-out for hawks, hummingbirds, foxes, chipmunks, and watching the songbirds and well-fed squirrels. He also loved spending time with his family – his grandchildren were the highlight of his life.

Fran leaves behind his:

He is predeceased by his:

Memorials: In lieu of flowers, please make a donation in Larry’s name to Heifer International, the Audubon Society, Doctors Without Borders or your favorite charity.

Funeral: Funeral Service will be held at 11:00am, Tuesday, January 10, 2023 at Kurrus Funeral Home, with Rev. Robert Souders officiating. Interment will follow at Valhalla Gardens of Memory in Belleville, IL.

Live Stream: His service may be viewed starting at 10:50 am through the Kurrus website live stream link.

He will be greatly missed by all who knew him. We invite anyone who knew and loved Fran to attend the services to celebrate his life and share a memory or two with his family.