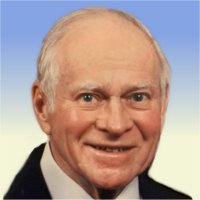 Lawrence Dare Kneezel, Sr. 99, of Appleton WI, formerly of East St. Louis, Belleville and Bloomington, IL, passed away Monday November 23, 2020. His favorite hymn was “Leaning on the Everlasting Arms” and that is what he is now doing.

Larry was born in East St. Louis. IL on September 2, 1921 to Reece and Dollie (Caskey) Kneezel. He graduated from East St. Louis Senior High School in 1939 and went to work at Midwest Rubber Reclaiming Company. He signed up for the army in April 1942 and spent much of WWII in the South Pacific, receiving The Combat Infantryman’s Badge and the Asian Pacific Theater of Operations Medal for his service there. When he returned to the US in early 1945, he trained recruits at a basic training camp and was promoted to sergeant, bypassing the rank of corporal.

During the war he wrote to Opal, the sister of his classmate Roy Kollmeyer. He had never met her, but wrote to her for 32 months before meeting her in person in 1945. On March 22, 1947 Larry and Opal were married at State Street Methodist Church in East St. Louis. He liked to say that she was his Prize of War!

After he retired from Midwest Rubber Reclaiming Company as chief financial officer in 1987, he and Opal moved to Bloomington, IL, where they lived and built many fond memories for their children, grandchildren and great grandchildren before moving to Appleton in 2017.

Larry and Opal were founding members of Tri-Valley Baptist Church, Bloomington, IL. He was also formerly a member, deacon and elder of Edgemont Bible Church, Fairview Heights, IL. His faith in Jesus Christ was central to his life and he served in the church in many different ways. If the church was open, the family was there.

Larry was a hard worker, whether at Midwest or at church or doing various projects at home. He was an avid gardener. He designed and helped build more than one of the houses they lived in. When not working, he enjoyed broadcasts of the St. Louis Cardinals. In 1968 he attended the World Series game when Bob Gibson struck out 17.

Larry was predeceased by Opal and is survived by their children, grandchildren, great grandchildren, many nieces and nephews and his sister Naomi. He was also preceded in death by his parents and other siblings.

The family would like to extend special thanks to Willow Lane Assisted Living and Heartland Hospice for their loving care and support.

Burial: Interment will be at Lake View Memorial Gardens, Fairview Heights, IL next to his loving wife Opal.

Services: It is anticipated that his memorial service will take place in the summer of 2021 close to his 100th birthday and at a time when hopefully people can travel and gather again.