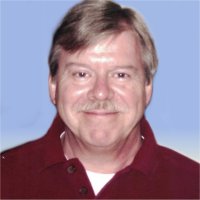 On October 14, 2019, Jack Monteith, 70, of Belleville, Illinois completed his journey on earth. He was surrounded by love and warmth and comforted by the sound of his granddaughter’s giggles.

Jack was born to parents Barbara Hill and Everett Monteith on August 14, 1949 in Paragould, Arkansas. The family eventually moved to O’Fallon, Missouri. Jack enjoyed a fun and active childhood with his four siblings: Steve (Sharon), David, Linda (David), and Rick (Patti). He filled his days exploring the neighborhood creek, adopting any and all critters that crossed his path, and charming those around him with his trademark wit, cleverness, and kind nature. Jack’s youngest brother Rick remarked that growing up, “he represented everything that was cool, from frayed cutoff jeans and water buffalo sandals to Cheech & Chong and Steve Martin albums.”

Through the loving scheming of his future mother-in-law, Katie, Jack connected with JoBeth in Carbondale, Illinois, where they both attended Southern Illinois University. He quickly wooed her with his handsome looks, cool demeanor, and incomparable sense of humor. He also impressed her with his pragmatic culinary productions—most notably 11 cent mac and cheese with powdered milk. They were married on June 29, 1974 in DuQuoin, Illinois. A proud inductee of the Rodman clan, he gained five new siblings through his marriage to JoBeth: Kaki, Jeanie, John, Patty, and Charlie. He also gained a slew of nieces, nephews, in-laws, and other extended family along the way.

After moving to Belleville, Jack and JoBeth welcomed their first child, Nicky, followed by Jon five years later. Jack made sure to give his kids the full southern Illinois experience with summers on the lake, ridiculous amounts of grilling, pontoon boating and tubing, and family game nights featuring Trivial Pursuit—where everyone quickly learned he was the one you wanted on your team. And if you were under the age of ten, you would definitely be begging Uncle Jack to play “Werewolf,” as he was the best at jumping out and roaring from behind every corner and telling spooky stories to the thrill and delight of all the kids.

In life, Jack wore many hats and wore them well. As a fisherman, he was always looking for the next big catch. As a techie, he moved from one device to the next with the ease of a Millennial—much to the astonishment of those around him. As a friend, he listened closely and counseled via humor. As a father-in-law to Nicky’s spouse Katy and Jon’s spouse Michael, he welcomed them without hesitation and treated them as kids of his own. As a grandpa, he would light up each time he saw Lena’s face. And as a father, husband, son, and brother, he loved quietly but fiercely and always made sure to keep us laughing.

Memorials: In lieu of flowers, the family invites you to donate to one of the following organizations:
American Kidney Fund https://www.kidneyfund.org/ or the St Louis Children’s Hospital https://www.stlouischildrens.org/  If you prefer to make a donation by cash or check, Kurrus Funeral Home will collect them.