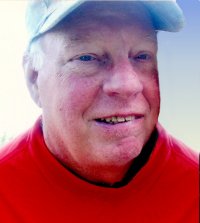 Jack graduated from Cathedral High School and Parks College. He was employed as an A & P lead mechanic at Eastern, TWA and American Airlines. He served as a Marine in the Vietnam War as a wireman and wire chief. He was a member of the IAM and the Prairie du Rocher American Legion.

Jack loved the outdoors- especially visiting his family’s property on the Mississippi River near Prairie du Rocher where he had many happy memories. He loved boating, fishing, hunting, and riding around in his Ranger with his co-pilot, Shady. He especially loved spending time with family and friends with a Stag beer in hand.

A few days before Jack went into hospice, he was able to enjoy his own celebration of life with family and friends on a perfect day at the river, which filled him with joy.

Special thanks: Special thanks to the Mercy South ICU team who saved Jack’s life during COVID which blessed us with two extra years. Thanks to Dr. Stephen Sanders, Dr. Hu, the DaVita Dialysis Team, and Hospice of Southern Illinois who helped make Jack’s last days peaceful and pain free.

Services: According to Jack’s wishes, there will be no funeral service. He will be cremated with a private family interment.

Memorials: In lieu of flowers or memorials, we instead encourage acts of kindness and to never pass up the opportunity to show your family and friends how much they are loved.