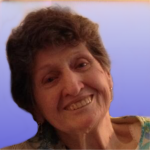 Preceded in death by

Helen lived and raised her family with Bill in Belleville, Illinois, where she was an active member of St. Augustine of Canterbury Catholic Church. She worked for many years in the patient accounts department at the old St. Elizabeth’s Hospital in downtown Belleville. Helen retired in 1990 when she was finally able to spend more time with her husband, children, grandchildren and great grand children. The couple’s retirement was spent with treasured lifelong friends traveling far and near across the United States, as well as internationally to Mexico, Canada and Europe.

More than anything, Helen enjoyed socializing with friends, family and acquaintances who very often quickly became new friends. She was an avid seamstress for many years, and worked tirelessly with friends to create quilted works of art, which became holiday and birthday gifts for family and close loved ones. She also enjoyed card games, and spent many days and nights playing with close friends and fellow church parishioners. Helen possessed a smile that could light up a room and never failed to offer it to a friend, a stranger or anyone in need of a lift in spirits. Her compassion for others extended not just to family, but to everyone – and her devotion to her husband and children was without end. She was fiercely proud of her kids and enjoyed watching them build their lives and the lives of her grandchildren.

Helen’s strength was tested multiple times throughout her life, but perhaps never as much as during her lengthy battle with dementia, which eventually weakened her physically but never diminished her indomitable spirit. She remained an upbeat and cheerful presence in her family’s life, and her smile will live on in the hearts of all who loved her.

Memorials:In lieu of flowers, may be made to the Alzheimer’s Foundation of America (www.alzfdn.org) or the Gateway Chapter of the Cystic Fibrosis Foundation (<https://www.cff.org/Chapters/St–Louis/Key-Supporters/>).

Services: The visitation is from 9 a.m. until 11 a.m. on Saturday, Sept. 7, 2019 at St. Augustine of Canterbury Catholic Church with a funeral service immediately following at 11 a.m. The burial will be at Mt. Carmel Cemetery.