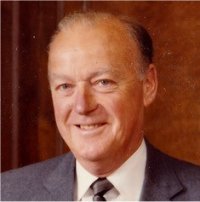 Much loved husband, father, grandfather and great-grandfather, Harry E. Cruncleton, Jr., 96,
passed away peacefully at Sarasota Memorial Hospital in Sarasota, Florida, on Sunday, April 4.
Harry was born November 18, 1924, in St. Louis, Missouri, to Harry E. Cruncleton, Sr. and his
wife, Sarah (nee Webb). Harry lived most of his life in the Metro East communities of Illinois. He
and his cousin, James “Jimmy” Gough, were raised as brothers by their grandparents, James
Orr and Myra Gertrude Webb, in the Edgemont area of E. St. Louis, Illinois. He graduated from
East St. Louis High School in 1942 and immediately enlisted in the U.S. Navy, serving until the
war’s end aboard the U.S.S. San Francisco as its electrician in the Number 1 turret – he
survived 13 major battles in the Pacific Theater and was at Okinawa for the raising of the flag.

Harry married his childhood sweetheart, Juanita “Toddy” Tolin in 1944. Shortly after returning
home in 1945, he began his banking career with positions at Union National Bank and the First
National Bank in E. St. Louis. During this time, he graduated from the American Institute of
Banking and the Graduate School of Banking at Rutgers University. In 1969, Harry led the
formation and charter of Bankers Trust Company in Belleville, Illinois, and, in 1990, along with
his son-in-law, Terry W. Schaefer, chartered West Pointe Bank & Trust Company in Belleville,
where he served as its Chairman until his retirement in 2007. Harry was instrumental in
legislative change in Illinois, allowing for multi-bank holding companies. While Chairman of the
original Bank of Belleville and it’s holding company, Belleville Bancshares, Harry negotiated the
first such merger in the state between First National Bank in Belleville and the Bank of
Belleville’s holding companies, ultimately becoming the Magna Group, where he served as it
Co-Chair until 1990. Harry touched numerous lives over his life and career, always grateful for
the relationships and those who helped him along the way.

Harry is predeceased by his:

Throughout his life, Harry demonstrated devotion to family, community and country by his
support and commitment to each. Over the years, his dedication to various state and civic
organizations earned him numerous awards, including the 50 Year Award from the Illinois
Bankers Association and the Okaw Valley, Boy Scouts of America, Distinguished Citizens
Award. Harry also served 26 years on the Board of Directors of his beloved St. Clair Country
Club in Belleville. The lifelong interest in genealogy he shared with Toddy and his passion for
American History led to memberships in the Sons of the American Revolution and, most
recently, the Jamestowne Society. Harry enjoyed sports and was a season ticket holder of St.
Louis (Baseball) Cardinals and MIZZOU Tiger football for over 40 years. His love of golf and
community spirit resulted in his Chairmanship of the Annual American Cancer Society’s golf
tournament for over 25 years, generating contributions in excess of $500,000 during that time.
His wit and story telling abilities kept us all inspired and laughing until the end, and we find
comfort in the knowledge that his stories and jokes are now being retold at a Higher level.

The family acknowledges the comprehensive care provided by a cadre of superlative doctors
with the many specialists assembled and the wonderful nursing staffs at Sarasota Memorial,
Lakewood Ranch Medical Center, and Tidewell Hospice, all of Sarasota, Florida, and his home
healthcare provider, Debbie Schenk. Their devotion to his wellness was heartfelt.

Memorials: In lieu of flowers, contributions can be made to: the American Heart Association, Tidewell
Hospice in Sarasota, Florida, or St. Matthew United Methodist Church in Belleville, Illinois.

Service: Due to Covid concerns, a family service was held on Saturday, at Kurrus Funeral Home in
Belleville; with a Celebration of Life to be announced at a later date.