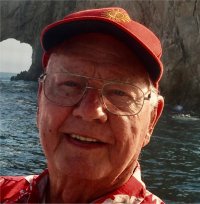 Harold worked as a switchman for AT&T, formerly Illinois Bell, for most of his career and served our nation as a merchant marine during wartime. He was a member and volunteer at Blessed Sacrament Catholic Church in Belleville, IL. Harold was a long time member of the Althoff Fathers and Friends Club. He was an original member of Althoff Bingo, raising over 1 million dollars for the school. He was a member of Belleville Elks Lodge #481, working to serve those veterans who also served our nation.

Harold always greeted everyone he met with a smile, a handshake, and his signature “Hi Guy” greeting. Harold was a seasoned traveler, exploring the world with his family. He was the patriarch of the Ord Family for nearly a century, and leaves a legacy of love to three generations of family members.