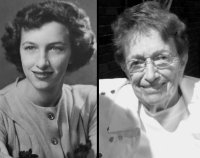 Gloria wore many hats during a long, active and anything but dull life: housewife, secretary, business owner, long-time member of the Aldersgate Methodist Church in East St. Louis, IL past president of the East St. Louis Jaycee-Ettes, Khoury League Mom, soldier’s Mom, clown’s Mom and cheerleader for her kids.

For the last decade of her life, Gloria depended on an electric wheelchair for mobility, and she could be seen up and down the streets of Belleville, on buses and on the Metrolink, going shopping, to doctor’s appointments and sometimes just sightseeing. She was independent to a fault, sometimes even putting herself at risk, but she was relentlessly fearless and was always confident in the kindness of strangers.

It was this independence and her refusal to go quietly that continues to be an inspiration to her kids, family and friends. Peace.

Memorials: The family asks that in lieu of flowers, donations be sent to Cardinal Glennon Children’s Hospital of St. Louis, MO

Services: There will be a celebration of her life on Saturday, Nov. 6th from 1:00 -3:00p.m. at Kurrus Funeral Home in Belleville, IL