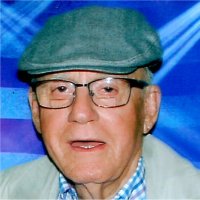 Ed enjoyed family the most. His favorite memories were of taking the whole family – wife, children, and grandchildren – to Disneyworld and Daytona and Cocoa Beaches in Florida, and later, making trips with great-grandchildren to Twin Rivers Landing on the Black River in Lesterville and Fort Davidson in Pilot Knob, Missouri. Ed called himself a “river rat.”

Ed attended Harmony Grade School and was a Belleville News-Democrat newspaper carrier at 9 years old, serving 96 customers. During his youth, he also set pins at Dunn-Weber Bowling Alley and caddied at St. Clair Country Club. During high school, Ed was a grounds keeper at Westhaven Country Club. He graduated from Belleville Township High School in 1953, where he played varsity baseball, basketball, and cross country, qualifying for state in 1951. He worked at Klamm Florist from 1953 – 1955 while attending Belleville Junior College, graduating in 1955. In October 1955, he began working at the St. Louis District of the U.S. Army Corps of Engineers, where he worked for 40 years until his retirement in 1995. Ed worked at Krupp Florist part-time and after his retirement. He moved from Belleville to Smithton in 1999.

Ed proudly served in the U.S. Army from December of 1957 until December of 1959 in the 3rd Armored Division in Friedberg, Germany. Ed always told the story of how Elvis Presley was stationed at the same army base at the same time. Ed had to sleep in the barracks, while Elvis had a three-story mansion in town with four body guards and three secretaries. The base chaplain allowed Elvis to park his sports car near the church so the chaplain could keep an eye on it so nobody would scratch it. “Your taxes at work,” Ed would lament.

From 1955 to 1967, Ed was on survey crews, surveying for construction and raising levees along the Mississippi River, as well as completing hydrographic and low water surveys along the Mississippi, Illinois, and Missouri Rivers. He was on original surveys (head chainman) for the axis of the dams at Carlyle Lake, Lake Shelbyville, and Rend Lake in Illinois and Mark Twain Lake in Missouri. From 1967 to 1995, he was installing and maintaining automatic river and lake gauges (stage and rainfall) on the Mississippi River from Hannibal, MO, to Cairo, IL, on the Illinois, Kaskaskia, Missouri, Big Muddy, and Meramec rivers, and Carlyle, Rend, Shelbyville, and Mark Twain lakes. These gauges had access via a telephone system that he maintained. In 1974, he was part of installing the first system using transmission of river data via satellite using the Geostationary Operational Environmental* Satellite – the first in the United States on the Mississippi River gauge on the Eads Bridge in St. Louis, which is still in use today.

Ed’s wonderful wife, whom he married on April 28, 1956, at St. Paul Evangelical and Reformed Church in Belleville, meant everything to him. He “couldn’t have made it without her.” She was the joy of his life.

Memorials: Memorials may be made to St. Paul’s United Church of Christ.

Funeral: Funeral Service will be held Thursday, March 12, 2020 at 10:30 am at Kurrus Funeral Home, with Rev. Michelle Torigian officiating. Interment will follow at Valhalla Gardens of Memory, Belleville, IL.