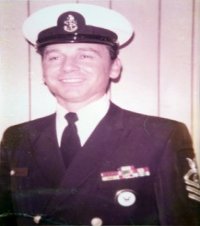 He was a member of St. Pancratius Catholic Church in Fayetteville, IL. Edward served in the United States Navy working as a diesel mechanic, assigned to the USS Midway and then the USS Schenectady during the Vietnam War. In addition to other Naval recognitions,he was awarded the Combat Action medal. While stationed in San Juan, Puerto Rico, this farm boy from Biddleborn, Illinois, talked himself into the job of using the Naval yacht to take VIP’s deep-sea fishing in the Caribbean. From 1975 to 1985, he served as a Naval recruiter for the St. Louis and Southern Illinois regions, inspiring many young men and women to join the Navy he loved.
After retiring, Ed enjoyed life in Fayetteville with his wife, Marie. He spent his time hunting, fishing, farming, playing cards, and watching his family grow. He loved telling stories. One of his favorites was about how he, when he was very young, noticed a girl in church; she and her family sat in the same pew every week, and she always wore her hair in banana curls. Then, one Sunday, they weren’t there; they had moved. Fast forward to when Ed was in high school and struck up a conversation with -no surprise- the prettiest girl in school. They talked about their families and church. When she mentioned she -as a child- had attended St Libory church, it didn’t take him too long to put two-and-two together and realize this freshman was the banana-curled girl he had never forgotten. They married in 1963.
As a husband and father, Ed always said that things would get better when “my ship comes in”. But honestly, he made a good life for his family. Money might have been tight, but his wife and daughters lacked for nothing; he shared with us his love of nature and the outdoors, travel, books, history, and -most importantly- laughter and love. He always had time for his family.

And when the grandchildren were born, his joy knew no bounds. This somewhat-strict father morphed into a grandpa who couldn’t say no: ATV rides, hunting and fishing trips, Christmas scavenger hunts, card games (with bonus cheating tips), hiding Easter eggs, ‘dashing’ out of church right after Communion, carving silly pumpkins.

We remember the things that made him happy: seeing an eagle in the winter, frightening the squirrels out of the pecan trees, watching a gaggle of geese winging their way south, feeling the tautness of the fishing line when you know you’ve got a big one on the other end. We remember him glued to the TV during a postseason Cardinals game, despite the Santa Ana winds raging, and Marie packing up the car so we could evacuate the fires. We remember how he woke us up in the middle of the night that July of 1969 to watch the first man walk on the moon. We remember his well-deserved childhood nickname of ‘Ice Cream Eddie’ when he sent us to Dairy Queen to order his favorite treat (a banana-split without the bananas and with extra hot fudge). We remember that beautiful San Diego day when the Schenectady sailed under the Coronado Bridge, all hands on deck in their dress whites; they were coming home for good from Vietnam. The excitement of the brass band playing, the admiral’s speech, the balloons, flags, and bunting. And then the homecoming ending strangely and anticlimactically (for us kids, at least), when mom and dad sent us outside to play by ourselves for a while.