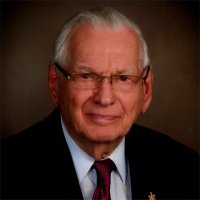 Dr. Wayne B. Cox II, 97, of Belleville, IL, passed away Sunday, July 19, 2020 at Barnes-Jewish Hospital in St. Louis, MO. Born December 17, 1922, in Crawfordsville, IN, to parents Wayne Bresee and Jessie, nee Hymer, Cox, Wayne grew up in Edwardsville, IL, and maintained a lifelong love for his hometown, following the high school Tigers basketball fervently for over 80 years. He was also deeply influenced by his time in the Boy Scouts there, in which he attained the prestigious rank of Eagle Scout.

Wayne later attended Wabash College and was a member of the Delta Tau Delta fraternity there before his studies were cut short by World War II. Wayne enlisted and served as Second Lieutenant in the Army Air Force, becoming a bombardier-navigator on one of the famed B-24 Liberator bombers and completing 16 missions. He was a lifelong patriot with a fervent love of our country.

While serving, his flight crew was grounded by fog in Topeka, Kansas where he met June, the love of his life. He said he knew right away he loved her. They married on December 29, 1945, and they had 3 children and wonderful life adventures together. They had looked forward to their 75th anniversary this year.

After the war, Wayne completed his studies at the University of Illinois, St. Louis University Medical School and he interned at St. Mary’s Hospital in East St. Louis, IL. He also served as Chief of Staff at Christian Welfare Hospital. As a General Physician and Surgeon, Wayne practiced with Drs. O.M. and H.E. McCann, and was a member of the American Medical Association and a Lifetime Member of the American Academy of Family Physicians. He was the last surviving original staff member at Memorial Hospital in Belleville (recently made part of the BJC network) which opened in 1958. Wayne made house calls, performed major surgeries, and delivered over 2500 babies. He kept up with medicine and medications, regularly completing his continuing education requirements, and was still a licensed physician at the time of his death. He was beloved by his patients and staff. His work ethic and integrity in life served as a role model for us all.

Wayne was an elder of the First United Presbyterian Church in Belleville, IL. He had a strong quiet faith in our Lord and Savior, Jesus Christ, that never faltered. He spent his life serving and caring for others, including going on 17 church mission trips, with his wife June, all over the USA.

Wayne had an amazing mind for facts of all kinds, history, and storytelling right up to the end of his life. He was a man of so many interests and passions, shared with June, which kept him active, involved, and young at heart. These passions included his family, his church, basketball (he could remember any statistic), baseball Cardinals, cars of all kinds and mechanical expertise which enabled him to repair anything (Motor Trend and Popular Mechanics magazines could be found alongside medical journals), traveling in their RV, boating on their pontoon boat, watching old movies, and many beloved pets. His life was full, with wonderful friends and family who were blessed to have him in their lives and who will dearly miss him.

Memorials: Memorial gifts may be made to the First United Presbyterian Church in Belleville, IL. 1303 Royal Heights Rd., Belleville, IL 62223

Memorial Service: Due to Covid 19 limitations, a private Memorial Service will be held on August 3rd, at 10:30am with Pastor Rob Dyer officiating. However, a live stream can be viewed at time of service at www.facebook.com/kurrusfh Interment will follow at Valley View Cemetery, Edwardsville, IL.