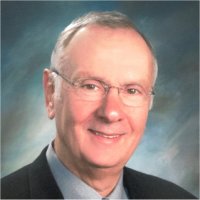 Thomas A. Kurrus died Tuesday, February 12, 2019, at home surrounded by family and friends after a 5-month battle with brain cancer.

Tom was born March 21, 1941, in St. Louis, Missouri, to Mable and Charles Kurrus. He was the youngest of 4 siblings and spent his childhood in Belleville, Illinois.

In 1958, Tom graduated from Belleville Township High School in Belleville, Illinois, where he met the love of his life, Sarah Grace Becker.  Their first official date was the Junior Prom, although Tom was in love with her since their Freshman year of high school.

Tom went on to college at Westminster College in Fulton, Missouri, where he was the president of Phi Delta Theta fraternity, President of the Junior Class, a prominent member of the track team and captain of the tennis team.  He graduated in May 1962 and married his long-time sweetheart, Sarah on June 23, 1962.

As a newlywed, Tom started medical school at the University of Illinois and graduated in 1966.  During that time, he and Sarah had two children, Jeffrey Anton and Ellen Suzanne. To help provide for his family, he drove a bus for the Chicago Transit Authority and got lost along his route several times only to be rescued by an elderly woman who clearly knew the route better than he did.

Upon graduation, Tom did a one-year internship at University of Illinois Research and Education Hospital in Chicago, Illinois, before being drafted in 1967 during the Vietnam War. He became a Captain in the US Army in Fort Greely, Alaska, until 1969.

After his family’s stay in Alaska, Tom finished his medical training at the University of Utah where he specialized in Internal Medicine and Infectious Diseases.  He went into private practice as an Infectious Disease Doctor and worked at St. Mark’s Hospital for 43 years. Tom eventually became President of the Medical Staff (twice), Chief Medical Officer and served on the St. Mark’s Hospital Board of Trustees for many years. Just before retirement, he took on an additional challenge and helped the hospital implement a digital records program called Epic.

Some of his other accomplishments include teaching about infectious diseases at The Veteran’s Administration Hospital and the University of Utah, Hospital, writing a chapter on Meningitis in a medical text book and he was a founding member of the Rocky Mountain Pus Club.

Tom had a very sharp wit and was always joking and finding the humor in life.  He was an incredible athlete and loved outdoor exercise.  He held a firm belief that recreational equipment should never be included in the household budget – it should be in its own separate category.  His numerous talents and hobbies include biking, skiing, golf, tennis, woodworking, playing the trumpet, gardening and his many animals. He was truly a jack of all trades and a Renaissance man.

Above all his accomplishments, Tom was a wonderful husband, father, grandfather and friend and will be missed by all who knew him.

Memorials: Tom had a special passion for the homeless – both humans and animals. In lieu of flowers, please consider donating to one of the following causes that were important to Tom. Cathedral Church of St. Mark, www.stmarksutah.org ,The Road Home www.theroadhome.org or The Humane Society of Utah, www.utahhumane.org.

Funeral: The funeral will be held at The Cathedral Church of St. Mark, 231 East 100 South, Salt Lake City, Utah, at 11:00AM, Saturday February 16, 2019. A reception will immediately follow the service in the Dean’s Hall on the Cathedral premises.