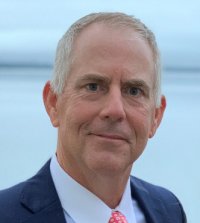 Born to Leonard and Claudette Kellow and raised in Findlay, Illinois, Bob graduated from Findlay High School and Southern Illinois Carbondale. He earned his Medical Degree from Loyola Stritch School of Medicine, followed by his Pediatric residency at Fort Sam Houston in San Antonio, Texas. Dr Kellow was a veteran of the United States Army.

Bob was a loving husband to his wife, Dawn, of 31 years. The love story of Bob and Dawn began during childhood when their families would get together for game nights. While their families stayed in touch, it wasn’t until years later that they reconnected. Bob and Dawn loved nothing more than being in each other’s company. They enjoyed traveling, nights out with friends, holding hands, midnight cruises on Lake Lou Yaeger and spoiling their kids and pets. They were a true love story and deeply devoted to one another.

Together Bob and Dawn created three beautiful children; Katherine Elizabeth, Rachel Anne and Samuel Robert. Bob’s kids were the brightest light of his life. He never missed a school play, cheer performance, or sporting event. The best part of Bob’s day was morning drop offs to school and picking Sam up from football practice. Family dinners together were a daily ritual and the conversation always started with Bob asking, “what did you do today?” Bob was an example to his children and always taught them that hard work, dedication, and positive attitudes were the path to a successful life.

Bob grew up playing sports with his brothers Leonard and Mike, and he excelled in both school and sports, most notably basketball and baseball. He passed his love and dedication for sport and competition on to his children. Bob was an avid St.Louis Cardinals, Chicago Bears, St.Louis Blues, and Fighting Illini fan. Bob also enjoyed, bowling, golfing, and trips to Red Rocks, Colorado for good music with even better friends.

Although he was known as a Husband, Father, Son and Brother, he was also lovingly known as Dr Bob. Over the last 27 years, Dr Bob became a staple in the community, running his pediatric practice and touching the lives of countless children and families throughout Belleville. Dr Bob had a calm and reassuring demeanor, and could always be counted upon as a listening ear. He will be greatly missed amongst the families he devoted so much of his life to.

Memorial Contributions may be made to : Robert V. Kellow M.D. Education Scholarship.

Floral Arrangements may be sent to Kurrus Funeral Home.