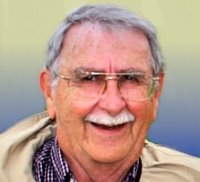 During his lifetime Tom had many titles. His monikers included doctor, Army captain, school board president, peer review chairman, and officer and member of too many charitable and civic boards to list. Yet the titles he held most dear were husband, grandfather, and father; probably in that order. He was, after all, a wise and learned man.
He met his wife Marcella Merz at Eugene Coyle High School in St. Louis, Missouri where he was an All St. Louis football player and class president. They married in 1956. She was the love of his life and for the next 62 years they were inseparable. Tom and Marcella had six sons in eight and a half years which made for a lively household. Tom was blessed with a God-given talent for listening intently; and when he spoke, he spoke with reason. He rarely spoke of his accomplishments, though he had many; and he never spoke of his generosity, though it was constant. Tom went through life with a twinkle in his eyes and the corners of his mouth always seemed to creep upwards in a smile. He loved a good story and he gave insight into his life through humorous, self-deprecating anecdotes where life usually got the best of him.
The son of two assembly line workers, Tom was the first of his family to go to college. He put himself through college and dental school by working jobs from waiter to caddy to foundry worker. His background was an integral part of who he was and it gave him empathy. His sons heard numerous stories from people down on their luck who needed emergency dental care that were told at the counter that Dr. Stubblefield said no charge because “he’d been there too.”
In the late seventies, Tom became the driving force behind legislation which he considered the highlight of his civic accomplishments. Parts of Southern Illinois were having a subsidence crisis. He discovered that insurance policies did not cover subsidence damage and that people were losing the equity in their homes due to the unpredictable shifting of coal mines. With no experience in politics, mining, insurance or engineering, he persuaded civic leaders and state, federal and local legislators that failure to address the issue could result in devastating losses to property values and inhibit local investment. His name never appeared in newspaper articles, because he preferred to give credit to the civic leaders and legislators, but after the governor signed the bill, he gave the pen to Tom.
When Tom passed away on May 9th, 2019 his wife lost her adoring husband; his sons lost their hero; his daughters-in-law lost their loving supporter; his grandchildren lost their biggest fan; his friends lost a bit of humor; and the world lost a good man who lived a good life.

Special Thanks: The family would like to thank their friends for their outpouring of sympathy and support.

Memorials: Memorials may be made to the Alzheimer’s Association and Siteman Cancer Center.

Services: There will be a private family ceremony in celebration of his life.