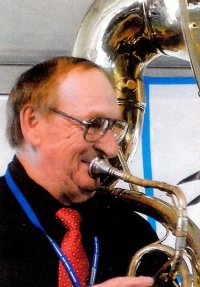 A 1955 graduate of New Athens High School, David “Red” Lehr began his music career at age 5, when he was big enough to stand on an orange crate box and play his daddy’s trombone at the Tilden, IL picnic. In grade school, as the strongest and tallest kid, he began to play the big Conn Sousaphone. His unique technique and showmanship led to concerts with the St. Louis Symphony Pops Orchestra and the Honolulu Symphony. He and Jean Kittrell took the “Jazz Incredibles” to Europe (Scotland, Netherlands, France, England, Italy, and Germany) six times as well as Japan and Canada. While performing at the Breda International Festival in the Netherlands they were voted the most entertaining band. In a poll taken by “The American Rag” jazz newspaper, Red was voted by the fans as their favorite Jazz tuba/sousaphone player. He was also picked to play in the international band at the Sacramento Jazz Jubilee. Red traveled throughout the U.S. playing jazz festivals and many jazz cruises. Of course, he played in St. Louis and the surrounding area for over 60 years. Red credited Jean Kittrell and Gene Pokorny, principal tuba player in the Chicago Symphony, for much of his success in music, though he gave special kudos to his wife Carolyn.

Red has operated Lehr’s Market in New Athens since 1972 with his wife Carolyn. Their son Jeff joined them in the business in the late 70’s and took over from his father upon his retirement.

Admired by classical as well as jazz musicians, Red has been featured in regional, national, and international conferences of brass instruments in Illinois, Kentucky, and in Ft. Meyers, VA where the Sergeant Major awarded him the “Medal of Excellence” and the General John J. Pershing Founders Medal” during the U.S. Army Band’s International Conference. Red eventually became the leader of the St, Louis Rivermen, and Red Lehr’s Powerhouse Five bands. He made over 25 records, cassettes, and CD’s of his beloved traditional Dixieland Jazz.

He was a member of St. John United Church of Christ in New Athens, IL and American Legion Post #6632 Red Bud, IL. He was a Veteran whom served in the United States Army.

Memorials: Memorials may be made to the St. John U.C.C. in New Athens, IL or Family Hospice.

COVID-19 restrictions will be followed, masks required, and social distancing. Please be respectful of time and do not linger so others may pay their respects to the family.

Funeral: Due to Covid-19, all services are private. Live streaming can be viewed at www.facebook.com/KurrusFH at 11am on Saturday, January 9, 2021 with Rev. Dr. Robert Koch and Rev. Dr. Donald Wagner officiating. Interment at Oakridge Cemetery, New Athens, IL.