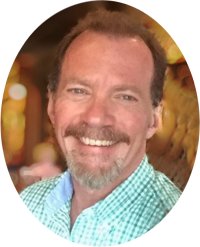 David J. Park (Dave), 60, of Lenzburg, IL, born April 20, 1960 in Benton, IL, died Thursday Sept. 10, 2020 at Barnes Jewish hospital. Dave was a loving, giving, and playful husband, dad, brother, uncle and friend to many. He believed that he lived a charmed life, one in which things always worked out.

From ages 4 to 6, his family lived in Australia, and compliments of Peabody Coal was able to travel around the world twice. He could recall seeing the Egyptian pyramids, and kissing the Blarney Stone. As the youngest of 7 children in his family, Sundays were the much-cherished times when the extended family would gather at his parents’ home in Tilden, IL. Had it not been for his love of/distraction caused by the internal combustion engine, Dave might have gone on to be a biologist or engineer. First came dirt bikes and later Jeeping with siblings and their spouses. In high school he took all of the shop classes available to him and participated in Beck Vocational’s Auto Mechanics program.

After high school he followed in his father’s and grandfather’s footsteps and worked for Peabody Coal for 22 years prior to his mine closing. He completed an associate degree in Mining Technology through Wabash College and worked the largest number of years as a repairman. For the last three years he served as the briefing officer of his mine’s Mine Rescue team. They would practice their response to a mine disaster and travel to competitions around the country to test their skills. Those trips always involved squeezing in a golf outing involving four man scrambles.

After the Marissa mine closure, Dave went to Ranken Technical College for an associates degree in Automotive Collision Repair. During his two years as a student he participated in the VICA USA Skills Competitions achieving a first place in the state of IL competition and a third place at the national level. Upon completing his degree, he was hired as an instructor in the same program at Ranken. He tricked/encouraged his students into volunteering to empty trash receptacles, to go to lunch early, to donate blood, and to run for student council positions. This was the job that he showed up early for and didn’t want to leave. He was disheartened when a new administration shifted the focus from student work ethic and integrity to profit. Other jobs that he’s held have included shop help for Wissehr Electric, farm help, cashier at St Louis U-Pic-A-Part salvage yard, and being an extra in a movie with George Clooney. At the salvage yard, he was amazed by the fact that customers came from all walks of life. Whenever he detected an accent, he was inclined to inquire about the individual’s country of origin; with delight he would share with his family the phrases that he was learning in Swahili. His biggest regret in life was not having served his country in the military; he’d taken steps to enlist in the Air Force, was only shy of having taken his physical when he allowed himself to give in to the money available working in the mines. He was glad to have served his community by sitting on the Board of Christian Education at St. Johns UCC, the New Athens Home for the Aged board, and the New Athens Unit District 60 school board.

As a younger person, Dave was always very shy, but he was determined to break out of that mold. In 1994 he met and married his wife, Connie Odle; he often would comment that anything he’s ever wanted he found through the classified ads. He captured her heart on their first blind date by taking her to Country Western line dancing lessons at the Silver Moon where the instructor had the gentlemen using their frame “to steer” their dates around the dance floor-what he might have lacked in rhythm, he made up for in charm and a good sense of humor. Phrases like “carte blanche” and “tout de suite” were unexpected coming from a coal miner.

They have one daughter, Georgia Park, who was the absolute joy of his life. He raised her as the son he never had. He created mental and physical games to challenge her, he taught her to drive a go cart, the tractor, and a manual transmission one-ton dually truck. He instructed her in the use of power tools and lawn tools, and in how to shoot a gun. He coached her in throwing a soft ball without an arch in its path. He chaperoned every grade school field trip and entertained Georgia’s classmates/terrorized teachers with his wildlife wonders. Dave made additions to the school softball diamond and hauled equipment for the travelling softball team. Dave and Georgia were partners in crime when it came to working on projects for school or at home; anything that Georgia could dream, together they could achieve.

Dave participated in a foundry sandcasting class at Freeburg HS run through SWIC for many years, and he served as the teacher for the last couple of years. It was the easiest job he ever had; students would be waiting on him when he arrived and had to be cajoled into leaving a half hour after the class was suppose to be over. The class was comprised of individuals that share a common love of craftmanship.

Dave was an avid collector of antique wood and metal working equipment. Although he never followed through with his dream of setting up a working museum, he did donate equipment to both the Missouri History Museum in St. Louis and the Museum of Labor and Industry in Belleville. He also had a love of cars and was a die-hard Chevy fan. In January 2018, tears came to his eye when he was notified that he was one of 69 individuals chosen from a worldwide drawing to have the opportunity to purchase the 50th anniversary of Chevy and Hotwheels collaboration special edition COPO Camaro drag racing car.

During the summer of 2017 Dave was diagnosed with CML, chronic myeloid leukemia, which is commonly deemed as the good kind of leukemia since, as of the early 2000’s, drugs were developed that keep the effects of the underlying unexplained genetic mutation at bay. The fine print on the first chemo medicine tried stated that it might cause narrowing of the arteries in the brain. In the summer of 2019, he had his first TIA, transient ischemic attack or mini stroke. Following extensive diagnostic tests, his chemo medicine was changed and maximum blood thinning medicines were added to his daily regimen. In August 2020, Dave had three episodes that sent him to the ER. When the third episode resulted in lasting damage to his left hand, a team of neurologists at Barnes hospital recommended that it was now time to take on the risk of performing angioplasty and stenting in the only functional carotid artery that remained that itself was significantly blocked. Although angioplasty and stenting have been successfully performed on the heart for a number of decades, it has only been in recent years that the same have been performed in the brain with mixed results. On September 10th, the procedure had gone as expected. However, not long after, the increased blood flow caused catastrophic bleeding in the secondary arteries in the brain.

Services: Dave’s body was cremated. A celebration of life will take place on Saturday Sept. 19th at 2pm on the parking lot of St. John UCC church in New Athens, IL. Those wanting to attend please bring your own lawn chair and covid mask, and DO NOT dress up. In lieu of flowers, memorials may be made to St John UCC building fund or to the Leukemia & Lymphoma Society.