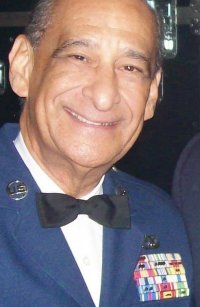 Daniel started his military career when he joined the U.S. Army in 1953. He was in the Quartermaster Service which handled all non-combatant supplies for the Army troops. They met on weekends for training and exercises, and went to camp several times a year for up to a month at a time.

After finishing school, his first assignment was to Tyndall AFB, Florida where he worked on the electrical systems of fighter aircraft. He was also assigned to the battery shop which he described as “a messy job, dirty and smelly because of the fumes”. It was so bad he actually wanted to leave the Air Force after 4 years.

However, when he married his first wife “Gerry”, he decided to stay in the Air Force, and was offered to retrain into Air Traffic Control Maintenance. He worked in that field for the rest of his Air Force career and was stationed in Viet Nam, Puerto Rico (Ramey AFB), New Jersey (McGuire AFB), Iran, and Korea. His last duty station was at Scott AFB, Illinois where he retired as a Chief Master Sergeant in 1988. It was also the same year his wife Gerry passed away.

After retirement, Daniel eventually remarried, and together, he and Linda started their own Prison Ministry. Daniel used his bilingual skills to preach the Word of God in the prison. He had an amazing singing voice and made a recording of several songs that he sang in Spanish and in English. He and Linda also sang together at several churches, lifting up the name of Jesus. He was kind to everyone he met, was always encouraging, and lifted many to the Lord in prayer.

Memorial donations are suggested to the American Cancer Society.