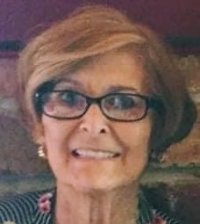 Cindy was born in E. St. Louis on May 19, 1947. She was a graduate of E. St. Louis Senior High School, Class of 1965 and continued to be active with her classmates by planning reunions and attending monthly class breakfasts.

Cindy was preceded in death by her:

Cindy spent nearly her entire career in the law field as a legal secretary for McGlynn & McGlynn. For over 30 years Cindy was a loyal and dedicated member of their staff. Since 2020, Cindy served as a Law Clerk for the Honorable Stephen P. McGlynn in the United States District Court for the Southern District of Illinois in E. St. Louis. She was truly beloved by all.

Cindy became an avid St. Louis Blues fan much later in life thanks to Andrea’s job with them. She attended many games with her grandsons, Reid and Holt who were her pride and joy. Whether Cindy knew the rules or not, she loved going to games.
Cindy liked to travel and finally visited New York City in 2016, her first Notre Dame football game in 2019 and wanted to visit Ireland one day. Cindy loved planting flowers, and once brought home a potted plant from Texas which several days later revealed a lizard living in it. Which she kept, and named Howard. Cindy also loved fashion and style magazines, which she inherited from her mom.

Most importantly in her life was her family, and especially her grandsons. Often referred to as “Nana” she easily became everyone’s Nana from the baseball fields, to soccer and most recently hockey, she was always in attendance if she could be.
Cindy loved children, and was a favorite among the kids in the neighborhood, opening her doors for kids to play with the accumulation of toys she kept through the years. She would do anything for anyone, and often did. She was one of a kind, and will truly be missed by all who knew her.

Memorials: Memorials may be made to the Siteman Cancer Center or American Heart Association.

Services: A funeral procession will depart from the funeral home at 10:15 am Friday, October 7th and will be followed by a graveside service at 10:30 am at Lake View Cemetery, Fairview Heights, IL.