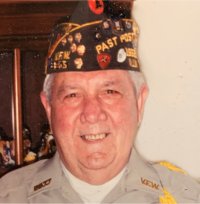 Charles worked as a carman for Nickel Plate Railroad. He was active duty in the U. S. Marines Corps from 1952 to 1954 and served in the Korean War.

He attended St. Mary’s parochial school and graduated in June 1941. He was a graduate of Central Catholic High School in East. St. Louis, IL. In 1945 he married the love of his life Margaret M. nee, Berecz, the daughter of Hungarian Immigrants on February 17,1947. Margaret died on April 8, 1985.

Charles worked at Royal Bond Inc. in St. Louis, MO, G.E. Supply in St. Louis, MO, Dow Chemical Co. in Madison, IL, from August 1954 to May of 1957. He went to work for Nickel Plate Railroad in 1957 and he was elected president and Local Chairman in 1965. He processed grievance in 7-10 days representing Thrifty Lodge 547.

He coached Khoury League baseball in Highland, IL and Fairview Heights, IL. He belonged to the Holy Name Society and helped at Fish Fry’s and picnics. Life member of the American Legion Post 53 of Caseyville, IL served as the Commander from 1992-1994 and currently Commander since 2002 taking care of all duties of the post and never turn down an Honor Guard. Member of the V.F.W. Post 805 serving as Commander from 1962-1964 again performing any duties asked of him. In 1965 he was elected Commander of the Allied Veterans Council (A.V.C) of East St. Louis, IL. In 1998 he joined the Italian American Club in Granite City, IL, St. Jerome Catholic Church in Troy, IL and Knights of Columbus in East St. Louis and Collinsville, IL.

Memorials: Memorials may be made to the American Heart Association or American Cancer Society.

Services: Due to the Covid-19 pandemic and out of concern for the health of friends and family, funeral services will be private. A celebration of life will be held at a later date.