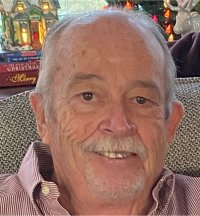 Chuck enjoyed spending quality time with family and friends, traveling with love of his life Donna, an occasional premium cigar and scotch, and lots and lots of golf.

After graduating from East Side High School in 1964, Chuck took classes at SIUE and entered the Air Force Reserves. He spent the entirety of his 50 plus year career in the phone/safety business. After receiving many industry accolades, Chuck retired as the Safety Manager of Southwestern Bell/AT&T. He retired again as a Consultant for Buckingham Manufacturing, a supplier for AT&T.

Chuck had a charitable spirit. From playing the Easter Bunny and Santa Claus at nursing homes to being the Exalted Ruler, Chuck spent many of his early years dedicated to the Belleville Elks Lodge #481. Among many of his other activities, he was a construction chief for the Swansea Kingdom volunteer-built playground and, most recently, a volunteer coach for the First Tee Greater St. Louis golf program. If someone needed help, Chuck was there willing and ready.

He was immensely proud of his daughters and was the biggest and most proud cheerleader to his beloved grandkids. They knew he was in the bleachers when they heard his recognizable whistle. He will always be remembered for his fondness of puns and corny jokes.

Memorials: Memorials may be made to the Donor’s Choice.

Funeral: Celebration of Life, Saturday, February 19 starting at 2pm at Stonewolf Golf Club, 1195 Stonewolf Trail, Fairview Heights, IL. Please join the family to toast Chuck and tell a story. We know he had many.